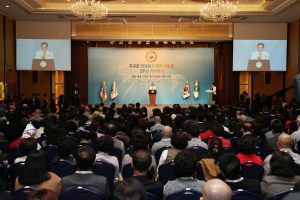 While the global society has been sending an interest and encouragement to the historic decision of the North Korea-US dialogue following the ‘Peace Olympics’ held in South Korea, a Korea-based international peace NGO held an event commemorating “The 2nd Annual Commemoration of the Declaration of Peace and Cessation of War (DPCW)” on March 14. In Seoul, South Korea, on the theme of “A Call for Building a World of Peace and Realizing Justice” was attended by 1,000 participants including representatives of politics, religion, and civic groups at home and abroad.

The host organization, Heavenly Culture, World Peace, Restoration of Light (HWPL) affiliated with UN DPI and UN ECOSOC, announced the DPCW on March 14, 2016, to strengthen solidarity of peace through a comprehensive cooperation of all sectors of society and to establish legally binding international law necessary for peacebuilding. The DPCW with 10 articles and 38 clauses, drafted by international law experts, includes provisions to avoid war-related actions and achieve peace, including respect on international law, ethnic/religious harmony, and a culture of peace.

Mr. Man Hee Lee, Chairman of HWPL, highlighted that every individual in the global society is responsible for constructing global peace. He appealed to the participants by saying, “Rather than waiting to take peace for granted, it is we who should put an end to war to protect humanity and our globe, and leave peace as a legacy for future generations.” “Law of today cannot compensate for the lives sacrificed from war. What we need is an instrument that protects human life, the very law that prevents war,” he added.

“No human being and no animal on planet Earth can survive from weapons (of mass destruction). Even an error or an accident can cause widespread damage to human life and property which cannot be replenished. We all have to work 365 days and 24 hours together for peace as a messenger of peace,” said, Mr. Pravin H. Parekh, President of Confederation of Indian Bar who participated in drafting the DPCW.

“If we want to put an end to war and build peace, let us work together for peace and overcome the boundary of state, ethnicity and religion. We have to think about how to resolve international conflicts through the adoption of the DPCW as a UN resolution. And the international society should provide assistance to facilitate peace education proposed by HWPL,” emphasized Mr. Deok Gyu Lim, former president of the International Law Association Korean Branch.

In the event, HWPL issued the official statement against anti-peace actions that hinder peace and justice with unsubstantiated information and distortion from socio-economic motives and human rights abuses by religious intolerance. In the statement it addressed that HWPL “will no longer tolerate attempts to obstruct the work for peace, putting personal gain over the common good of humanity. We urge all those yearning for peace and justice to take the right path, not the path marked with lies, and joins the effort to build peace together.”

The multi-national events for the 2nd Annual Commemoration of the DPCW calling for building a world of peace and realizing justice were organized in 166 cities in 71 countries, including South Korea, the United States, Germany, Ukraine, Britain, and China. 150,000 citizens and leaders of all sectors in the world took part in this global event urging the establishment of international law for the realization of a peaceful, just society and the denunciation of anti-peace activity.